Insane and Who Were in the Asylums of the 19th Century 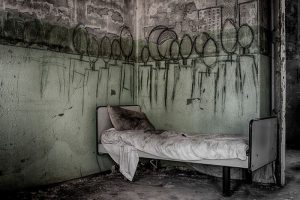 The “insane” of the past and the Seriously Mentally Ill (SMI) of today are different.  In the 19th Century the insane asylums also called lunatic asylums the population included largely what we now call schizophrenics. I don’t like to define folks as this or that so I would rather say people with schizophrenia. What was known for thousands of years as “insane” or “crazy” or “lunatic” or “madness” would get a name. in 1887 Dr. Emile Kraepelin Going reported that in Roman times madness was felt to originate from evil humors in the blood vessels of the uterus (Greek, hustera) and heart. Thus we have the term today of “hysteria or hysterical or hysterectomy”.

For centuries all mental and physical abnormalities were treated the same. Dr. Kraepelin first used the term dementia praecox and manic depression as being diseases of the brain causing dementia in young people. Bleuler, a Swiss psychiatrist first used the term “schizophrenia”. The roots of the word come from Greek. Schizo means split and Phren is mind. Over the years schizophrenia has been subcategorized into five: disorganized, catatonic, paranoid, residual and undifferentiated.

In a previous article on this website I wrote about the Insane Asylum that used to be on the grounds of the University of Mississippi Medical Center and the horrific finding of 7000 bodies found under ground as the medical center expanded. Then and as I shall discuss later there was a huge cross-over from the purely schizophrenic to forensic populations. I am saying that many unruly prisoners were transferred to asylums and vice versa. As well, although most of the population of asylums in the 1800s were suffering from schizophrenia, particularly catatonic and paranoid, there was a large slippery slope so that many people were confined who had no mental illness. Included were the mentally challenged (what we used to call intellectually retarded), physically deformed or disabled, heavy metal poisonings, cerebral palsy, autism spectrum disorders, metabolic disorders such as phenylketonuria (King George III of England, “the mad king”), tertiary syphilis among others. These latter were “put away” largely because they were a nuisance.

Jumping to the early 20th century is the case of Zelda Fitzgerald, wife of F. Scott Fitzgerald, is best remembered in the biography ZELDA by Nancy Milford. She is also the acclaimed biographer of A Savage Beauty about Edna St. Vincent Millay.

Zelda Fitzgerald was wrongly placed in and out of “sanitariums” by her famous novelist husband between 1930 to her death in 1940. She was diagnosed as having schizophrenia (an area of much controversy). In fact the biography states that her mental illness was easily due to jealousies and drunkenness between the two. Basically she was a nuisance because like F. Scott she was an alcoholic, novelist and an adulterer. Their lifestyle was as portrayed in The Great Gatsby. She was released from an Alabama sanitarium and finished his last work The Last Tycoon posthumously (he had died the year before). She voluntarily returned to the sanitarium where she died when the place was consumed by fire!

Many great authors, poets and authors were institutionalized in the 19th and early 20th century as discussed in Kay Redfield Jamison’s book Touched with Fire: Manic-Depressive Illness and The Artistic Temperament. Jamison, herself bipolar and co-chairman of the Division of Psychiatry at Johns Hopkins University sites the following personages: T.S. Eliot, Robert Lowell, Edna St. Vincent Millay, Boris Pasternak, Ezra Pound, Anne Sexton, William Faulkner, F. Scott Fitzgerald, Ernest Hemingway, Eugene O’Neill, Tennessee Williams, Vincent Van Gogh, Edvard Munch, Georgia O’Keeffe and Jackson Pollack. One can only wonder what these psychiatric institutions were like although I suspect that some were private sanitariums whose definition is any facility to preserve health or a health resort.

I discussed in detail the particular Insane Asylum of 1855-1935 and when it was moved to what is now the site of the University of Mississippi Medical Center. Seven thousand bodies were found buried under the original site when upgrading the medial center.

What I now want to discuss is State Psychiatric Hospitals still in existence today. I already mentioned the Napa State Hospital in California best described in Stephen Seager, MD in his book A Year with the Criminally Insane:  Behind the Gates of Gomorrah, 2014. He describes it as similar to the POW camps of WWII and now more a place to park forensic people adjudged “criminally insane”.

Over the last fifty years the focus has been on closing of U.S. public mental systems such that 95% of State Hospitals have closed. About 200 remain. California for example has one-tenth of the population of the United States but has only five. In an article in the Atlantic in January of 2015 the question is raised “Should the U.S. Bring Back Psychiatric Asylums?” Shutter Island Asylum in Ken Kesey’s book One Flew Over the Cuckoo’s Nest embodies the asylums of the 1950s with lobotomies, drugged and restrained patients, and as a dodge to avoid prison Jack Nicholson plays crazy and does it so well that he ends up catatonic. All those State Hospital’s nurses are Ratchets which probably was not far off the mark.

And yet, bioethicists at the University of Pennsylvania propose rehabilitating such stigmatized asylums. Dr. Sisti speaks of the need for facilities for long term care. He equates asylum and sanitarium as places for “safe sanctuary for the mentally ill”. There are now 45,000 people in State institutions compared to ten times that in 1950 and yet the population of the U.S. has doubled. Many have been successfully treated with newer anti-psychotic medications and are in community based outpatient treatment programs. However an overwhelming number are on the streets or in jails and prisons, called “the new asylums”.

But they state that some of the most seriously and chronic mentally ill have no place to go. “For them the optimal option is long-term care in a psychiatric hospital. …a return of psychiatric asylums that are SAFE, MODERN AND HUMANE”. They admit that implementing such a system now in which there is collaboration with the patient, i.e., voluntary, and resources, money, makes this likely a pipe-dream. The Federal, State, and County funds now are spent largely on the not seriously mentally ill. Also, how do you make asylums humane and safe? The State Hospitals that now remain certainly are not.