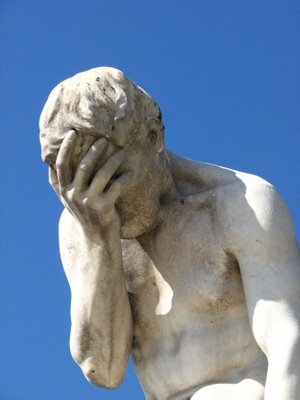 I can relate to the fear of recurrence but not really the shame. My episodes of depression are much scarier to me than my hypomanias. I have had about seven discreet depression crises stretching from 1973 to 2015. There no triggers except in 1992 when my wife died.

I am not going to describe them except to say I would rather have been near an explosion on a beach in Israel, had my heart rate drop to 34 without realizing it until about the fourth day, been knifed by a car hijacker, had a bleed into my spinal canal days after a lumbar herniation repair, pepper sprayed a psychotic person destroying a neighbor’s office and shot three times than have an episode of depression.

Several depictions of purgatory or hell are depicted by Michelangelo are a way of describing my depressions.

I personally fear depression episodes more than hypomanias perhaps because they are hypo and not psychotic. Fear of another episode of depression or mania involves concerns of attaining goals particularly in the majority of people whose disease onset is in the third decade. There is also fear about having to take off time from work or losing jobs, interrupted education, relationships with family, friends and more.

I have not been able to come up with any discussion of statistics of the incidence of divorce among couples when one of which has either of these diseases!

A biography, Robert Lowell: Setting the River on Fire: A Study of Genius, Mania, and Character by Kaye Redford Jamison was released in 2017, Knopf.  I have written an article based on this fantastic psychological study on my website (mdgolden.com). Regarding the fear of recurrence, Lowell said in 1939: “…if we see a light at the end of the tunnel, /it’s the light of an oncoming train.”

In their text book, Manic-Depressive Illness by Kay Redfield Jamison and Frederik K. Goodwin, 2nd edition, 2007, Oxford University, Jamison and Goodwin cite a physician who was off work for a long period for mania. He writes:

“Two years is a long time out of professional medical circulation—things forgotten, things not learned or heard of, but the most daunting problem is the prospect of further episodes of mania. The depression if it occurs is a more private feature of the syndrome. Mania is very public with a multitude of interested parties….will there be further episodes: how frequently; and will they be as debilitating? …Meanwhile what about my capacity to work, earn a living…. A hospital consultant is nothing if not reliable.”

As far as shame, I think this is more likely to be a problem in bipolar 1 with psychosis. In my case after being hypomanic I am more likely to apologize to people for my mouth and actions but nothing like one who has had a psychotic mania.

In the bipolar I and II  individuals who have acted bizarrely, had inappropriate behavior, psychosis, incited violence, blew away money, and made bad business decisions, hypersexual what I call male or female nymphomania, in and out of jail and psych facilities and more the agony and shame must be through the roof.

When the episode which may be two weeks, a month, six months finally blows over with medications what folks feel the most is shame. The shame leads not only to feel the stigma of others but to stigmatize oneself.

In Jamison’s biography, Lowell took his psychotic manias to new high. He had about 11 episodes of psychotic mania in 15 years until lithium in 1954 brought him back to steady reality. These don’t count his acute depressions. (mdgolden.com)

Again Lowell describes it thus: “No one who had not had the experience can realize the mortification of having been insane.” In a more detailed explanation of his shame Lowell wrote:

While the intoxication of mania lasts, I for one have no disposition to embrace death. After the intoxication is over, my chief emotional reaction is shame and disgust with myself, and a wonder that my fear of death could be so wonderfully and idiotically twisted. That the facing humiliation, of despair, or deprivation should produce a desire for death is quite natural.”

I believe what he is saying in the last sentence is that the shame alone can trigger a depression bad enough to consider suicide.

Joshua Logan was an American stage and film director and writer. He wrote after an episode of mania: “How can I go back to the there after all I’ve put my friends through, after all the galloping whispers and all the people who’ve seen me in this strange state? How will anybody, as long as I live, believe that I’m well again?”

I believe I have not felt such shame or self-stigma because most of my crises, although horrific depressions, are inward or invisible except to my wife and psychiatrist.

My first episode of “agitated depression” during medical school was all the more awful because I was not married. My roommate could not tell until I was hospitalized. Only my girlfriend knew but if I could not understand it, how could she? Also, how many of you can relate to the fact that during that first episode AND subsequent ones my parents were not supportive and did not to talk about it.