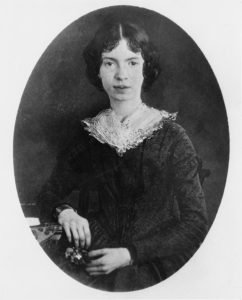 Emily Dickinson was a veritable recluse in her home in Amherst the town of her birth. In 1870 a family friend, Thomas Higginson asked her if she ever desired to travel outside Amherst. “I never thought of conceiving that I could ever have the slightest approach to such a want in all future time, I don’t care for roving. I do not go away, but the Grounds are sample—almost travel…To shut our eyes is Travel.”

It is fairly obvious that on up the paternal side of Emily’s family are many members with one or the other of the affective disorders. Her grandfather Samuel Fowler Dickinson, founder of Amherst College, described as “the nervous instability apparent in the nature of Squire Fowler’s decline and collapse. He was the first complicated Dickinson—at least, the first whose complexities are a matter of record.” Emily recognized the “front” the male members placed to hide their sadness and loneliness. “She worried about her father’s sad and lonely life. She worried about Austin, the most troubled of all, and wrecked hopes. Life was not easy for any of the Dickinsons, except perhaps Lavinia, though even she had a love affair that ended sadly, a temperament that was never placid, and eccentricities that in the end became extreme.”

Sewall goes so far as to say Emily Dickinson compensated for her own instability by her writing. But in her writings there are extreme shifts in mood from ecstasy to despair. The biographer states that she was aware of her family’s nervous tendency and because of the energy of her writing was “one of the best composed of all.”

Emily’s father, Edward Dickinson (1803-1874) was a tyrant and feared by his children. In a letter to his future wife Edward wrote, “Let us prepare for a life of rational happiness. I do not expect, neither do I desire a life of pleasure, as some call it-I anticipate pleasure from engaging with my  whole should in my business…and with my dearest friend… May we be happy, useful & successful?”

Emily would say of her father, “For all his worldly success, his many good works, and his brilliant family, he was a lonely and somber man.” Twice in this biographer’s narrative he likens Edward to Melville’s Ahab. He was obsessed with success to the point of remoteness. He did not know how to play. Emily said, “He lacked the low, enjoying power.” Sewall describes Edward as melancholic suffering from the “paradox of public success and private failure.”

By the time she was twenty, Emily said to Austin, “”we young ones think he is rather crazy.” Sewall puts it this way. “Edward Dickinson’s household has been described as a dictatorship, a prison, a ‘world of parental tyrannies’ where ‘a little girl [Emily] suffered silently and stubbornly.”

Contributing to Emily’s life of reclusiveness, is a story that Edward picked out Emily to refuse receive that attention of young suitors which according to Lavinia (Vinnie) resulted in her lifelong withdrawal.”

As far as Emily Dickinson’s mother Sewall says “all she [Emily] inherited from her mother was her first name. To Higginson in 1870 she said “I never had any other.” It seems her mother shared and did not recognize any of the sufferings of her family.

Perhaps most afflicted was Emily’s brother, William Austin. “From early manhood, he was a soul in trouble.” Emily and Austin communicated by letters. While teaching and going to law school, Emily wrote, “”Take care of yourself, Austin, and don’t get melancholy. Let not your heart be troubled…believer also in me! And Austin, don’t you care about anything else that troubles you – It isn’t anything – It is too slight, too small, to make you sorry so.”

In a letter to Emily in 1852 Austin talks of an agony which to me sounds like rapid cycling or even a mixed state. “My moods are changing from day to day (&sometimes even from hour to hour) and with them my views of all about me…For the shadows of life, with me, are so constantly changing from light to dark, from dark to light, sometimes as bright as bright can be, & at others, dark as a starless night, sometimes full of only lights of beauty &sounds of joy, & fragrant perfume, and every delightful sensation, and I feel the warmest, kindliest sympathy with all mankind, and can imagine then how no one can be less than happy, in this world of such beauty &grandeur, nor how a heaven can be more perfect than the one that fills my own heart. And, at other, as entirely cheerless no scenes meet my eye, but those of sorrow & misery, no tales, but of woe, my ears, and not the faintest glimmer from the faintest star of Hope to encourage, or bec [k]on to  Future of promise.”

Austin married and lived next door to the Dickinson home where Emily lived. Sewall states that “Austin as with both his grandfather and his father, Austin’s public success his steadily growing stature in the affairs of town, church, and college was in ironic contrast to his personal frustrations and private tragedy. Such a situation repeated in the three generations, seems almost to have been a Dickinson pattern. Emily shared in it, and escaped again, in her own way.”

Lavinia Norcross Dickinson was the closest person to Emily Dickinson in both of their lives. Before becoming Emily’s rock and caregiver Lavinia, Vinnie, had had many social interactions with men. The closest she came to marriage was to one Joseph Badwell Lyman.

After the death of their father, Edward, it was Vinnie that took charge. Their niece wrote, “Austin was too stunned to be of much use and Emily was hidd3n away upstairs, it as Vinnie who took charge, “the world seemed coming to an end,” Martha Bianchi wrote later. “And where was Aunt Emily? Why did she not sit in the library with the family if he Austin could? She stayed upstairs in her own room with the door open just a crack where she could hear without being seen.”

The first illusion of Emily’s recluse state is mentioned in a letter by her sister-in-law Susan Dickinson married to Austin Dickinson. Bad blood had begun during an enduring affair between Austin and Mabel Todd, a married woman living in the house next door. Emily’s called the Homestead and Austin’s the Evergreens did not mix. Vinnie remained with Emily throughout their lives.

When the Todds first arrived in Amherst in the 1880s Susan told Mabel it best to  stay away from the Homestead because of  a “remarkable sister of Austin’s who never went out, and saw no one who called. I heard of her also through others in town who seemed to resent, somewhat, her refusal to see themselves, who had known her in earlier years. Then came a note from this mysterious Emily’s housemate, her sister Lavinia demanding that I all ‘at once with my husband’.

The toxic relationship between Emily and Susan Todd who became Susan Dickinson by marrying Austin remained for the rest of Emily’s life and after. After Emily’s death Lavinia and Susan would fight a legal battle over who would edit Emily’s poems. Thus was it called it the war of the houses.

Mabel, the widow Todd, spoke thus of the War between the Houses:  “The two sisters (Emily and Lavinia) lived together own life entirely independent of the ‘other house’ and Austin was the only link between. He went to see his sisters every day, and they loved and revered him all the more since his profound unhappiness in his marriage (with Susan) had left him few satisfactions in his home. The story of his disenchantment with sue was told me, first by indifferent persons in town and then more in detail by Lavinia with a few comments by Emily in her curiously interrogative voice from THE NEXT ROOM.”

For fifteen years Emily Dickinson never left the Homestead until Gilbert (Gib) Dickinson’s death on October 5, 1883. He was Susan and Austin’s third child and at age 8 died of typhoid fever. Emily crossed to the Evergreens and sat by his bed the night of his death. She wrote a letter of commiseration to Susan but no more communication or reconciliation ensued.

After Emily Dickinson’s death in 1886 Mabel Todd gook on collecting and editing Emily[s letter and poems. Even though she never saw her face to face, it could be said that Mabel Todd penetrated, ultimately, to the ‘real ‘Emily Dickinson more surely than did and of Emily’s close associates.” Mabel remembered, “I used to sing to Emil frequently, in the long, lonely drawing-room. But she never came in to listen – only sat outside in the dark some hall, on the stairs. But she heard eery note. When I had finished she always sent me in a glass of wine on a silver salver, and with it either a piece of cake or a rose – and a poem, the latter usually impromptu, evidently written on the spot.”

Enemies for life, nevertheless, Susan wrote the following obituary that so puts her life in perspective.

“As she passed on in life, her sensitive nature shrank from much personal contact with the world, and more and more turned to her own large wealth of individual resources for companionship , sitting thenceforth, as someone said of her , ‘in the light of her own fire.’ Not disappointed with the world, not an invalid until within the past two years, not from any lack of sympathy, not because she was insufficient for any mental work or social career – her endowments were so exceptional – but ‘the mesh of her soul,’ as Browning calls the body, was too rare, and the sacred quiet of her own home proved the fit atmosphere for her worth and work.”

Note: Kay Redf the past. Appendix III lists them and whether they were ever institutionalized, given ECT or committed or tried to commit suicide. I have discussed a giant of the twentieth century above. I’ll sield Jamison’s book Touched with Fire: Manic Depressive Disease and the Artistic Temperament is a must read book when talking about bipolar disease or major depression of famous people of the arts inwitch to a novelist of the 19th century next and after that discuss great leaders of the past.

I referenced The Life of Emily Dickinson by Richard B. Sewall, Harvard University Press 1974, as the source for this article.

Lithium for Bipolar I and II: Part Two
This is section is from my first book “An Insider’s View of Bipolar Disease.” It…