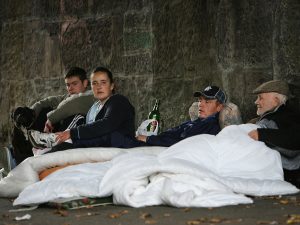 If you walk in San Francisco’s Union Square, or along Mission or Market Street or under the Highway 580 overpass you can see homelessness is epidemic. This population is rising here and in all cities. I have seen this become a rarity to so common place as to be numb to the sight and encounters. Often the homeless can be seen walking and muttering gibberish or under sections of cardboard or in sleeping bags during the day. The green areas at Union Square were changed to largely cement terraces to reduce the population.

According to a monograph by the Treatment Advocacy Center (TAC) 33% are Seriously Mentally Ill (SMI) that are untreated. Who are the SMI? They are largely people with schizophrenia and to a smaller extent bipolar disorder with manic episodes that become psychotic.

Why untreated? The reasons are manifold and include lack of access to mental health care, fewer psychiatric beds, non-compliance with medications, families who rightfully cannot have them in the home due to violence, lack of residential facilities or board and care for long-term care of the SMI, so called “dumping” after hospitalization and anosognosia. A large proportion of folks with schizophrenia are not even aware they are sick, i.e. that they have a mental illness; Anosognosia.

The TAC organization is one of two that advocate for the SMI rather than for simple mental illness. The other is the Mental Illness Policy Organization (MIPO). These two groups put their efforts toward the SMI. The Substance Abuse and Mental Health Services Administration (SAMHSA) develops the mental health policy of the U.S., State and County funding. This is the Federal Government agency that has a 3.6 billion dollar annual budget for mental health but does not focus on the 3 million Americans who suffer from SMI. This is what J.J. Jaffee calls the mental health “industry” in his book Insane Consequences. Among other programs that SAMHSA spends money on prevention of mental illness. MENTAL ILLNESS AND SERIOUS MENTAL ILLNESS ARE NOT PREVENTABLE.

On average folks released from mental institutions are homeless and back on the streets within six months of discharge. The SMI who have been hospitalized in the past are three times more likely to get their food from garbage. There is also the issue of the homeless being much more likely to get assaulted.

Releasing people from mental institutions was thought to be cost effective. In fact in New York City the cost to tax payers was $41,000 dollars per homeless person per year because of frequency of ER visits, incarcerations, shelters, 911 calls and suicides.

A monograph put out by the Mental Illness Policy Org (MIPO) reported the largest study of homelessness. Almost 600,000 people are homeless on a given night in the United States. Statistics were similar to the TAC study. 25% were the SMI or 140,000. ALMOST HALF HAD SOME MENTAL ILLNESS.

The overwhelming cause that makes living alone or with family untenable is delusional, hallucinatory and bizarre behavior that is untreated. The only recourse is homelessness or incarceration in jails or prisons and cycling between the two.

Another huge problem is the lack of a plan for further psychiatric care once stabilized in an acute or chronic psychiatric hospital after discharge.

I have mentioned in a previous article that an answer for all of the above is Kendra’s Law in New York State and Laura’s Law in California although in the latter each of the 58 counties has to decide to implement it.

What are the other two-thirds causes of homelessness? In a PBS website the homeless are divided into families and single persons. In the former according to the 2008 U.S. Conference of Mayors In the case of people in families the main causes are lack of affordable housing, poverty and unemployment. For single homeless person’s substance abuse, lack of affordable housing and mental illness are the main causes. I have discussed that of the single person homeless one-third are mentally ill. Obviously there are crossovers in both categories.

Military veterans account for another large group of the homeless men but again there is often co-existing substance abuse and/or mental illness, PTSD for example. As far as demographics 49% of homeless are black and 39% are non-Hispanic whites.

An abstract from the American Psychological Association goes so far as state that substance abuse occurs in up to 50% of people with schizophrenia. Alcohol is the most common agent but psychomemetic drugs such as the hallucinogens LSD, psilocin mushrooms, phencyclidine (PCP) and poly illicit drugs are the worst. As in the other abstract schizophrenia with abuse of these drugs is more likely to lead to violent behavior. In addition there are the other medical complications such as heart valve infections and HIV/AIDs if used intravenously.

There is also the debate about which comes first. Substance abuse or schizophrenia? The literature is overwhelming that the primary disorder is schizophrenia even if it has not yet expressed itself. In such cases the schizophrenia is genetically programmed and will manifest itself independent of the drug abuse.

Unfortunately, homelessness and mental illness are not going away any time soon.