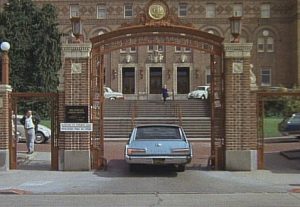 During my Medical Internship about fifteen of us rotated through San Francisco General Hospital (SFGH). The cases and anecdotes below all were from SFGH, the County Hospital for all of San Francisco. It was the blood and guts hospital and like County Hospitals the patients were indigents except for those who came through the ER trauma ward. These could be the President if he was shot. (Actually happened outside the St. Francis Hotel but the lady missed.)

Perhaps my favorite was the case of the gypsy queen. She came into the ER with an acutely tender abdomen, which indicated the need for immediate exploratory laparotomy (cutting open the abdominal wall). CT scans weren’t around then. The patient was in the OR when my resident was called with a lab report. It told us her sodium was extremely low and her potassium level sky high. After reading the labs, simultaneously we said, “acute Addison’s crisis,” which has such abdominal signs and symptoms. We immediately called the operating room, but the surgical team had already finished the lap and had found nothing. Then, when we told them the diagnosis, we heard a long pause.

Meanwhile, outside the ER, the waiting room overflowed into the hall with at least one hundred gypsies because this patient was their queen. The resident and I decided on a plan. The two of us went out the window from the men’s ward and used the fire escapes to reach the window of the recovery room. We met up with the surgeons as they were wheeling the gurney into that recovery room. When two of the gypsies were allowed to enter, the surgeon told them they’d “let out the evil humors and she should be
fine with additional medication.” They accepted that. We then gave her a huge dose of cortisone by IV. We were also able to lower her potassium and raise her sodium with other medications. She didn’t require ICU and, with the switch to oral cortisone and another drug, aldosterone, she was discharged a week later. She would have to take low doses of these drugs for life.

Presenting, as the “queen” did, with acute Addison’s crisis, is rare. When the vomiting is long enough and the sodium and potassium are low enough, the patient develops what we call an acute abdomen, which almost always means something bad is happening in the abdomen and requires surgery.

In those days, all residents spent three weeks working in the tuberculosis ward at SFGH. At any one time, approximately thirty patients were diagnosed by sputum with “red snappers” or red curved bacteria seen under the microscope after the appropriate stain.

Patients received three drug therapies, but to be discharged, they had to have three consecutive
negative sputum stains showing no snappers.

The sputum (what you hock up on a bad day) of people who have COPD and TB looked patently gross. Indeed, one could fill up a standard plastic urine cup with just their morning’s hock. The difficult part was transferring the stringy goober to a slide. So I developed the two-slide technique. I placed two slides vertically into the cup and pressed them together. As I removed them, voila! A nice thin layer of phlegm stuck to each slide.

Sometimes we’d count each slide as two specimen. We’d speed up the process by spitting our own phlegm into the cup of patients with two negatives, and then they’d be discharged to finish the course of therapy for twelve weeks as an outpatient. Unspoken rule!

One day I arrived at the ER at Mission Emergency for a six p.m. to six a.m. shift and saw all sorts of policemen—plainclothes cops and correctional center cops—outside one of the curtains. At SFGH, we received inmates from San Quentin Prison who needed in-patient care, so of course, we had a prison ward. That night, I asked the resident going off duty what was happening. He told me a man was in protective custody as the only witness involved in the Zebra killings between 1973 and 1974. Even Art Agnos was wounded. He later was mayor of S.F. There were 14 random killings that were racially motivated.

This witness had a martini at his hotel and swallowed the toothpick in his drink. The solution was to take serial X-rays to see if it would pass. After showing all sorts of identification to the policemen, I introduced
myself. On the patient’s X-rays, I saw the toothpick had passed to the beginning of the small bowel, a little off vertical. Several hours later, I could no longer see the toothpick on the X-ray, so the two lawmen had to accompany him to the bathroom. After he passed his stool, a nurse strained it and got the toothpick. If he hadn’t passed that toothpick, it would have required opening him up to retrieve it.