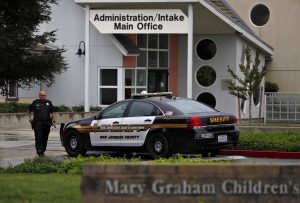 A San Joaquin County Sheriff’s deputy walks back to his car after responding to a call to Mary Graham Children’s Shelter April 6, 2017 in French Camp, Calif.

I want to preface this review of the article below by saying that nowhere is the term seriously mentally ill (SMI) used which applies to schizophrenia and severe bipolar disorder. Most of the money allocated by the mental health “industry” excludes the seriously mentally ill. See a recent release by J.J. Jaffe, Insane Consequences, a must read for anyone who is an advocate for mental illness.

I read an article from January, 2011 from the Stockton Record which is in San Joaquin County in the Central Valley of California.  The subject is the Mary Graham Children’s Shelter”. (Stockton Record Jan. 8, 2011 by Nancy Price and Fran Bott)

The shelter occupies the old buildings behind the original San Joaquin General hospital. After revelations of abhorrent issues below “some” changes were made in the article updated from 2001.

The facility opened 43 years earlier for the rescue of children up to age 18 who have been removed from awful family homes of neglect, abuse, etc. It is sort of a large “Foster Home” but with no adoption option. Unfortunately after age 18 they are sent out into the world with no plan. The facility has a census of about 1400 “children” ages up to 18. I emphasize 18 years old for a reason.

Since the first article in 2001 to before the writing of this article in January of 2011 assaults on residents and staff, damage to property and runaways have brought attention to the facility. The San Joaquin County Juvenile Justice-Delinquency Prevention Commission spent three months in 2009 studying these issues. Two directors were forced out within a year, new licensing procedures, new job requirements for staff members requiring more training and experience working with “troubled children”.

However, a recent budget cut over ten years by the State as more “out of control children” with nowhere else to go ended up in 54 beds at Mary Graham. Some new admits from homes over abuse or neglect became violent as in breaking windows and other destruction of property but the facility does not have to report them as “repeat offenders” as there is nowhere else for the County to send them. The Human Services Agency reported 696 maintenance requests for the 18 month period before January, 2011 at the shelter. Obviously only a small portion were allowed to do so

Despite the above changes there continue to be tremendously bothersome incidents all of which have occurred in the year before the writing of this article, i.e. in 2010.

The two year old brother of a thirteen year old both fled the facility after another OLDER boy dragged the two year old around the playground with a rope around his neck believing he was a puppy.

A 12 year old boy was arrested after cornering a girl in a housing unit. He choked her with both hands and intended to rape her and then kill her. He told the authorities he was pissed off because the victim had sprayed his bed with mousse.

Now here are some examples since the new rules were implemented in January of 2011:

A 16 year old “girl” (my italics) was admitted to MG and after a few hours wanted to go back to juvenile hall. She told the writer that the smell or urine and bullying by other residents led to the following exchange. “You want to back to juvenile hall?”  I said, “Take me. I don’t want to stay. If you don’t take me back, I’ll run away.”

The Count’s chief probation officer said” These kids, they aren’t delinquents, but there are no safeguards for them. These kids need care and safekeeping, but not a penny has been expended on that, on the residential side at least.” Of late Health and Human Services are trying to recruit various social –service agencies to transfer MG residents under age 18 who have demonstrated a danger to other children or staff. They are talking with four private residency programs to provide for “children with serious mental health problems”. I embolden and underline this because only now, in the fifth page of the article does the word mental appear. The term juvenile delinquent has been used multiple times.

The Board of Supervisors asked Human Services to investigate. Their findings were that there was not suitable alternative housing for “out of control” children (I think she means teens) and “Children with severe emotional problems are not a new phenomenon at Mary Graham.” Again me: Since when has emotional problem been used as a euphemism for serious mental illness?” The other term I find being repeated over and over is aggressive.

In October of 2010 a mother speaking about physical and sexual abuse suicide attempt of her daughter while in MG became an advocate for change and has appeared before at the county Board of Supervisors. The Supervisors asked the Human Services Director for a report on MG. For the HS report the San Joaquin County Juvenile Justice Delinquency Prevention Commission’s Child Advocacy Committee reviewed charts that “reported incidents of violent, suicidal and sexually inappropriate behavior on the part of some children at the shelter such as fondling, throwing metal chairs, fighting, indecent exposure, profanity, running away, hitting other residents, jumping out a bedroom window, spitting at and biting staff, and defecating and smearing the walls with feces.” The committee found no evidence that any of these incidents were reported to a caseworker or mental-health professional.

The Commission highlighted the file of a “13-year-old boy who threatened to commit suicide. The boy reportedly climbed onto a ledge of his dormitory building and threatened to jump off headfirst. Three months before the incident, the boy had been admitted to a hospital for a psychiatric evaluation after he saw his (dead father) who told him, ‘if he wanted to be with him, just kill himself’ Despite this information, which was in the boy’s file, there was no indication that any mental-health professional examined him after the suicide threat.”

As an advocate of Laura’s Law for the seriously mentally ill (SMI) in California and in particular my County, Stanislaus, I find it hugely disturbing that this “haven” called MG has turned a blind eye to the fact that many of these kids in their late teens suffer from mental illness such as major depression disorder or bipolar disorder and some with SMI who in large part have schizophrenia.