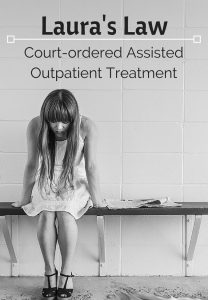 First some background on the law and where it stood between conception in 2002 to 2010. Then an update to 2015. The law is intended to allow for an alternative to hospitalization and police incarceration for the seriously mentally ill (SMI). Its purpose is to direct such people to outpatient intensive treatment. It adds other options to 5150 holds for danger to others or self.

Laura Wilcox was a mental health worker In Nevada City in Nevada County, California in 2002. She was a college sophomore who had been tops in her high school and while on winter break from Haverford College was working at a clinic. On January 10, 2001 she and two other people were shot to death by Scott H. Thorpe who was schizophrenic and who had resisted family and social services efforts to be involuntarily hospitalized during a relapse. He was determined to be chronically ill and to live out his days in Napa State Hospital.

Becoming advocates for mental health Laura’s parents presented to the State Legislature and alternative: assisted intensive outpatient treatment for the SMI in crisis. Assembly Bill 1421 was passed in 2002 and signed into law by the governor. It was worded that it be implemented on a county by county basis. As of 2010 only Nevada County had fully implemented the program. One county, the index county, in eight years!

As mentioned the law has to be passed by the County Board of Supervisors for intent or actual implementation.

Proposition 63 passed by referendum created the “millionaires’” tax which is a 1% surcharged for anyone making over one million dollars in a year on a yearly basis. As of 2015 2.5 Billion dollars were generated for just that year. The monies were to go just to public mental health projects. Now called the Mental Health Services Act (MHSA) this would help fund Laura’s Law but the clock is running for money to be used for Laura’s Law. One huge problem for MHSA is lack of oversight.

Now, what are the criteria for a patient to qualify for the program? 1: eighteen years or older 2: suffering from a SMI in crisis 3: unlikely to survive in the community without supervision 4: history of non-compliance 5: hospitalized, incarcerated in a prison or jail twice within the last thirty-six months or 6: one or more acts attempts or threat of serious episode of danger to self or others

If a judge familiar with the subject in a bench trial feels the person meets the criteria the individual will enter the program which provides: intensive community treatment services and supervision by multidisciplinary teams of highly trained mental health professionals. The law provides for due process for the patient to petition the court to leave the program.

Studies of Kendra’s Law a similar program passed in New York before Laura’s law shows statistical significant improvement in five benchmark outcomes for those in the program compared to those who are not. Violent behavior, suicidal thought or attempts, homelessness, involuntary commitment, recidivism after discharge.

Now jump ahead to 2015. Twelve counties nave implemented the program (out of 58 counties). In Nevada County there was a : 46% reduction in hospitalizations, 65% drop in incarceration, 61% drop in homelessness, 911 calls down 44%. The Boards of Supervisors only respond to savings: an average of $2:00 saved for every dollar spent for reducing incarceration, arrest and hospitalization.

The twelve Counties have implemented Laura’s Law are Nevada, Yolo, Placer, Mendocino, San Francisco, Contra Costa, San Mateo, Kern, Orange, LA, San Diego and El Dorado.  I spoke to a watch dog organization for San Francisco County who stated that implementation there has been so full of beurocracy as to be dysfunctional. I heard a speaker from Contra Costa County who spear headed the implementation there. He said that from conception to implementation took four years. The hang up was proving to the Board of Surpervisors that the program saved money. The only way they could get the figures to show the supervisors was to invoke the Freedom of Information Act.

A huge problem is the availability of psychiatric beds and psychiatrists. In all of San Francisco County there are only 18 psych beds at San Francisco General Hospital. I have spoken to NAMI Tuolumne County and they tell me there are no psych beds and they had one psychiatrist for Medical patients and he was leaving. So, in many counties SMI folks are residing in jails and correctional officers are their de facto medical professionals.

A bit off subject but some statistics are pertinent. SMI are 16 times more likely to be killed by police. 16% of the population in prisons/jails have mental illness. One in ten police encounters involve a subject with mental illness and about one in four fatal police encounters involve someone with mental illness. A given police office will on average respond to an average of six encounters a month. To handle these problems more and more police departments have developed crisis intervention teams (CIT) and education to de-escalate situations when encountering a SMI person acting our or suicidal.

Now on a local Stanislaus County level Ken Carlson yesterday (1-27-2017) reported in the Modesto Bee that NAMI spoke to the Board of supervisors of the need for Laura’s Law to be implemented here. Rhonda Allen of NAMI stated that besides overloading the police/sheriff’s departments the single in-patient psych facility held on 5150 are held a few days and in general are sent out without follow-up recommendations. Also, in my own experience the County is vastly underserved by private psychiatrists. In yesterday’s meeting it was noted there has been a large increase in 911 calls and ER visits. There is a single CIT psychologist who provides CIT training and rides along with police but this is not enough.

The County CEO apparently has checked with other counties with Laura’s Law and a big problem is enforcing the law as intended.  Nevertheless a good sign is that an outside consulting group has agreed to present pros and cons within three months. From my count two of the Supervisors are strongly in favor and two seem undecided and skeptical.