The below article is  based on two books The Years of Lyndon Johnson: Master of the Senate written by Robert A. Caro and LBJ by Irwin Unger and Debi Unger released in 1999. They are only historical. I have gleaned out sections that suggest an affective disorder. This post, however, will be about his Senate years and the first book. 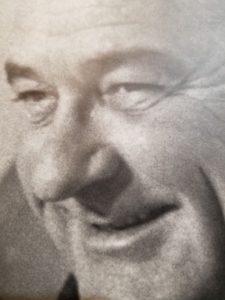 A pattern that would dominate his life before and during his choice of politics. “His insistence on being the center of attention, of dominating any room in which he found himself, had never slackened. At Washington dinner parties, he wanted to do the talking, and if someone else held the floor for any length of time, he would go to sleep at the table—or pretend to, his eyes closing, his head nodding forward. When he woke up, friends say, ‘he woke up talking.’”

In his early years in D.C. Johnson was very self-conscious. He had his suits made oversized “to conceal his weight—a disproportionate amount of which was in his stomach: he would shortly begin wearing a girdle in an attempt to conceal what was sometimes an enormous paunch…”

As a young Democrat inheriting the legacy of FDR “he could dominate a room with his charm. In his circle of young New Dealers in Washington, he was the life of every party with his practical jokes, his quick wit, his wonderful ‘Texas stories’ about the hellfire preachers and tough old sheriffs of the Hill country, his vivid imitations of Washington figures, and his exuberance; jumping up on a table in Spanish restaurant, he pulled little Wiely Hopkins up with him to dance a flamenco.”

Abe Fortas, later a Supreme Court Judge remembered, “There was never a dull moment around him. The moment he walked in the door, a party would take fire. Maybe in a different way than the party had been going when he came in, but it would take fire. And he wanted to dominate every room he was in. If he couldn’t lead, he didn’t want to play—wouldn’t play.”

Ed Clark, who had known Johnson since his college days, and who for almost twenty year would be his principal attorney and principal operative in Texas, would say that, “He was an emotional man, and he could start talking about something and convince himself it was the right, and get all worked up, all worked up and emotional, and work all day and all night… .”

Caro recalls his “earthiness.” A colleague in ‘40s Washington remembers, “He would piss in the parking lot of the House Office Building,” but not try to hide it. “I remember once, we were walking across the lot and some female secretaries were behind us, and he just stopped and began to take a piss right in front of them.” Caro apologizes for this behavior as that those times were a man’s world, sons of farmers, where locker-room humor was rampant.” He took, “great pride in his sexual apparatus…exhibitionism an about his sexual prowess…had been striking to his college fellows. Exhibiting his penis to his roommates”, Johnson called it ‘Jumbo.’” Returning to his room after a date, he would say, ‘Jumbo had a real workout tonight,’ while relating physical details of the evening.”

In a later section Caro describes behavior that to me is clearly hypomania that untreated and obviously undiagnosed has gone over the top to irritability. “But drama and fun and inspiration weren’t all he filled his office with. Entering his office in the morning, he would stride from desk to desk. If an assistant’s desk was cluttered with papers, he might say, with a snarl in his voice, ‘Clean up your fucking desk.’ If an assistant’s desk was clean, he might say, in his voice, ‘I hope your mind isn’t as empty as that disk.’ Moving from desk to desk, he would pick up or yank out of typewriter whatever paper an aide was working on, and, one says, ‘look to see if anything was wrong with –and God help you if he found something. Jesus, he could rip a man up and sown.’ ‘God, you’re stupid,’ he would yell at one assistant.’ You couldn’t find your ass if you were using both hands!’” ….he would reach out and grab the nearest phone—even if at that moment a secretary was talking to someone on it. Ripping the phone out of her hands as she was in the middle of a sentence, he would cut off the call and dial the number he wanted. As for incoming calls, they had to answered on the first ring—or else.”

On one occasion in my (me) mind he is clearly almost reaching psychosis. “…when he had buzzed out from his inner office for a Scotch a secretary made a mistake and poured a sherry instead, yelling, ‘You’ve poisoned me!’ Johnson hurled the glass against a wall so hard that it shattered. And then he sat at his desk, not saying a word, just staring at the secretary…she knelt on the floor blotting up the sherry and picking up the pieces of glass, using paper towels.”

“His rages were terrible” Congressman Richard Booking, said. He gave an example. An aide, Gene Latimer thought it would be reasonable to make a large map of Texas marking each of its 254 counties with each county chairman. He pinned it to an office wall. The effort took a whole work day. The next day Johnson said, “I don’t pay you to make maps, do I? The next time you do something like that, I’ll rip the fucking thing right off the wall.” Once Nellie Brill Connolly, an aide, did not get a phone number fast enough. Johnson threw a book at her. “I was a little afraid of him after that.”

When elected Senator and he and old and new staff moved to the Senate office building, Johnson’s abuse accelerated. He would say to a recently divorced staff woman when she served him coffee that was not hot enough, “No wonder you couldn’t keep your husband, you can’t even make coffee.”

In the middle of Caro’s book we learn something about Johnson’s forebears which brings me into more clarity about heredity and his mental illness. In the 1860s and 70s the Johnson family ranch had been the largest in arid west Texas. The original Johnson brothers, Sam Ealy and Tom, were making their fortune in cattle ranching. Due to being poor business decisions and a drought herds died off as did pasture land and when Tom died in 1877 he was broke.

Sam went on to marry a Bunton who had a knack for business and converted to cotton. Over ten years they were able to buy back a portion of the ranch. Their eldest son, Sam Ealy Johnson Jr. married Rebekah Baines and out of their loins came Lyndon in 1908. By 1922 due to soil and drought that would not be conducive to cotton destitution was again the price. The family including five children, including one sibling Sam Houston Johnson, were uprooted to Johnson City.

Lyndon had four siblings. Sam and three sisters. Caro describes “All four had a nervousness, a fragility of temperament,” more striking as adults. Two sisters Rebekah and Josefa developed ulcers. Rebekah and Lucia’s were “were to live relatively stable lives.”

Josepha, born in 1912, while “still an undergraduate at San Marcos, bright, tall and strikingly beautiful, stories about what the Hill County call her ‘looseness’ or ‘wildness’ in sexual matters began to spread…so did tale of her drunkenness; Arthur Stehling, the powerful Fredericksburg attorney who kept Gillespie County in line for Lyndon, was called on  more than once to intercede after she had been brought to a sheriff’s office or police station in some small Hill Country town because of complaints about a drunken party in a hotel or motel…”

As for his brother, to whom Lyndon was closest growing up, Sam Houston became a lawyer. After leaving as chief assistant to their Congressman Kleberg, Lyndon offered the job to his younger brother. The rising star took another path after that.

Caro quotes, “He loved to party, loved to drink, and to grandiosely pick up the check when he was out with friends. And he was always buying money, the indulgent Kleberg had him put on the payroll of his family’s King Ranch as a public relations consultant, but Sam used the money to rent an expensive apartment and hire a valet, and his debts only increased. His marriage led to two children that he deserted and subsequently an illegitimate son. His weight dropped, his ulcers flared and he spent time in and out of hospitals sometimes for treatment of alcoholism, sometimes for what appear to have been nervous breakdowns.” Lyndon always tried to protect him with odd jobs and eventually allowing to stay at the new Johnson ranch.”

Journalists, though as a group not allowed the ranch, George Reedy observed that Lyndon’s “behavior was in some areas as frenetic in Texas as in Washington. …He would sometimes embark on ‘a wild drinking bout’”

LBJ was a dedicated womanizer. He caressed other women in front of her (Lady Bird)….Horace Busby was to recall sitting in the back seat of Johnson’s car while Johnson was showing the ranch to a friend of Lady Bird’s who had come to visit. Johnson was driving, with Lady Bird in the front seat at the window and the friend sitting between them. Leaning over the front seat to ask a question, Busby saw that Johnson had his hand ‘under the woman’s skirt and was having a big time, right there in front of Lady Bird,’” The latter said not a word.

“Lyndon Johnson fell into a depression” after his first attack.  Although common after heart attacks, his doctors told aides “that this one seemed unusually severe. His closest advisor, Walter Jenkins said, “He felt…if he had any chance to be President or Vice President or something, that this had ended it…He became quite despondent at times.” He was put on antidepressants and they did nothing.  He “just wouldn’t talk, wouldn’t have anything to do with anyone.”

“Lyndon Johnson’s old self had been characterized by violent mood swings, however, and they persisted in the hospital, so that from day to day …his staff would not know whether they would find Johnson cheerful and chipper or lying flat on his back in his bed, speaking only in monosyllables and monotone, unwilling to take an interest in anything anyone told him.” His only antidote was Lady Bird and letters from friends and constituents she read to him.

He remained at Bethesda Naval Hospital for five weeks “periodically falling back into that terrible depression, a pit of despair so dark that at times Jenkins did fear that he would kind of give up, maybe wouldn’t make the effort to recover. I thought maybe he would just say, ‘This is it. I’ve had it.’” For a few days, Jenkins says, Johnson would be “all right, but then he’d have these periods. Of despondency … and then he’d be all right for a while, and then he’d have another period of despondency.” He thought he would never become President.