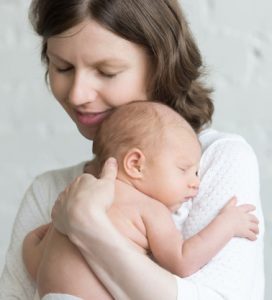 When parents think of the impending birth of their baby the usual emotions are excitement, joy and anxiety. The last thing on their mind is postpartum depression. The “Baby Blues” occur with the first two weeks of birth in some mothers who can be overwhelmed with the new care of a child. These include mood swings, crying spells, anxiety and difficulty sleeping and generally begin within two to three days after birth and last up to two weeks. Commonly this condition resolves on its own.

Some new moms might go on to develop all the criteria of major depression known as postpartum depression. The incidence is 10 to 20% which if using the average of 15% computes to 600,000 women per year in the U.S.   As in major depression at least five of the following occurring more than two weeks and usually longer, often up six months define major depression. These include difficulty bonding with the child, withdrawal from family and friends, fear of not being a good mother, feelings of sadness, emptiness, pessimism, feeling guilty and worthless, agitation or its opposite (little body motion and flat affect), hopelessness, early day awakening, obsessing, not wanting to get out of bed, gain or loss of weight, suicidal thought, lack of interest in hobbies, difficulty functioning and making decisions, fatigue and inability to concentrate.

One out of 1000 women will develop post part psychosis which takes the form of crisis just as seen in paranoid schizophrenia or manic psychosis including the following: confusion, disorientation, obsessive thought, hallucinations, delusions, sleep disturbance and paranoia; if left untreated this can lead to catastrophic consequences to the mother or the child.

A vicious cycle occurs if the mother thinks this is a character flaw or weakness. Like major depression postpartum depression is endogenous. It comes from within and is not due to anything a mother does or does not do. The cause is not completely understood but after childbirth but the levels of hormones estrogen and progesterone suddenly drop. Other brain and blood levels drop or fall. These include cortisol, thyroid, prolactin oxytocin, testosterone and brain neurotransmitter levels. Mothers at-risk are those who have had depression during this pregnancy (for which ECT may be the best therapy) or those with a history of depression in the past, a family history of depression or bipolar disorder, medical complications during childbirth such as premature birth, prior still birth or miscarriage or a baby with medical problems, lack of support by the father or family, a coexisting medical illness in mom, drug or alcohol before or during pregnancy and unplanned or unwanted pregnancy. Cigarette smoking and lower socioeconomic status increase a risk. A correlation of race applies as well.

Studies of incidence of postpartum depression by race found no difference. What differences were seen were due to the amount of care sought by mothers seeking care for depression.

Prevention involves routine pediatric checks at each visit up to six months. For those with risk factors visits to the pediatrician should be more frequent with the patient filling out a questionnaire and telephone support.

Therapies include talk therapy with a psychologist or social worker. Two of which are cognitive behavioral therapy (ignoring negative thought) and interpersonal therapy (working through personal relationships.)

Medications are a difficult issue both during pregnancy and for breast feeding. None of the newer more effective anti-depressant has been on the market to conclude risks to the mother and fetus during or in breast milk after pregnancy. Of the medicines the only one that seems useful are SSRIs but Zoloft shows no benefit. Hormone therapy is dangerous because of the risk of blood clots during the first three months. During pregnancy no medications are known to be safe and that is why ECT is the therapy of choice if the pregnancy involves suicidal thoughts. The same applies to post-partum depression if the practitioner sees and signs or symptom of psychosis.

In concluding I want to mention a novella written by Charlotte Gilman written in 1890 entitled “The Yellow Wall Paper.” Written in the first person she describes her treatment for post-partum “melancholia.” Her doctor and husband feel that all forms of stimulation should be eliminated. She is given a room in the house that with only a bed and window. A wet nurse takes care of the baby. All her writing instruments and paper are removed. She is given her meals with short talks with her provides.

The room has peeling and faded yellow wallpaper. After a period of time the narrator begins to see shapes moving behind the yellow wall paper. After a longer period the shapes take on the form of women trapped behind the paper making contortions. She then begins seeing bars on her side of the paper. By the time the doctor and her husband let her out of the room she is walking on all fours and catatonic.