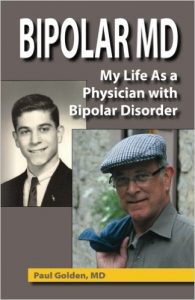 A foreboding of things to come occurred in the summer of 1973. I was 25 years old and in my third year of medical school. To say I began to have anxiety puts it mildly. I faced issues I’d never experienced before. For example, I’d awaken at four o’clock in the morning and lie in bed obsessing about “nothing” for the rest of the night.

Those mornings, I had a difficult time getting out of bed. My obsessions weren’t about clinical rotations or any particular thing. I was simply afraid of the coming day. I call it “morning terror”—and let me tell you, it was frightening.

With it came feelings of hopelessness, despair, and eventually fatigue. These feelings prompted thoughts that I wasn’t doing well on my rotations. After weeks of this obsession and terror, I lost the ability to concentrate. Again, I knew something bad was happening psychologically but what exactly, I didn’t know.

One day I knew I needed help—and fast. I called the Department of Psychiatry at Renard Hospital, which is associated with Barnes Hospital, our teaching hospital. I told the receptionist I needed to talk to a psychiatrist. As she was giving me a date out in the future, I interrupted her. I told her I was a medical student in deep trouble and needed help now. Something I said or the way I said it rang true, and she got me in with a Dr. McClure that day. I include his surname because Dr. McClure was instrumental in my recovery during that crucial year of my life. He passed away in 2010.

I saw Dr. McClure that afternoon. He heard me out and said I was in the middle of a major depression with agitation. He gave me Librium to take the edge off, but it did absolutely nothing except I felt the need to hide the fact from my roommate.

The next week he tried Norpramin, a tricyclic antidepressant. Again, over the next two weeks I felt no better and actually worse with a dry mouth and constipated! I knew I was falling deeper into a dark hole.

Edna St. Vincent Millay calls it “being six feet under”. That morning awakening may be the worst part of depression for me.  Depression in general Winston Churchill called “Mad Dog”. Yet the final feeling that tells me I need help is the inability to concentrate.

The crisis came one night when I went driving aimlessly around the County of St. Louis and found myself having difficulty finding my way. I did manage to get to the Blueberry Hill Bar outside St. Louis The bar was owned by the sister of a platonic girlfriend I nicknamed Crazy Mary. She was a free spirit who was bisexual and became a good friend. I sat with some med school chums but they were laughing and I could not.I stayed at the bar fifteen minutes.

I then drove, with some difficulty, to Barnes Hospital and went screaming and crying into the Emergency Room. I must have created quite a scene because the next day I woke up on what I subsequently found was the sixth floor of Renard Hospital where hardcore
schizophrenics were placed. I was in a padded cell with no belt or shoelaces. My meals were pushed through a slot in the door, and I had only a little twelve-by-twelve window with wires crisscrossing it to see through.

The next morning Dr. McClure saw me there with some angst on his face. He had not been on call the previous night. I heard him say to the nurse to transfer me immediately to the third floor. I did not know what that meant but it seemed that it must be a good thing. He told me I had received 1000 mg of Thorazine IM in the ER…