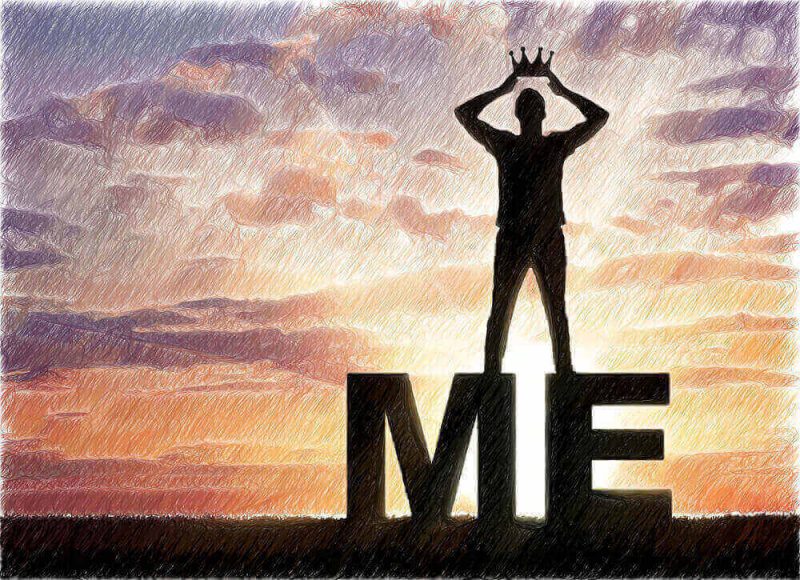 As I started to research this topic I found that most books about the disorder deal with surviving narcissistic abuse by a spouse or other family member, mostly the former. I must say I never thought about this flip-side to narcissism.

NPD is discussed in a Mayo Clinic post and defines it thus: “a mental condition in which people have an inflated sense of their own importance and a deep need for excessive attention and admiration.” This leads to troubled relationships. As above the Lack of Empathy leads to empowerment to abuse those close to them. Those with NPD may seem strong but are fragile and have a low tolerance to criticism. They are unhappy if they don’t get the special attention they feel they deserve.

As per the Mayo Clinic piece the list of symptoms and their severity are below. Having five or more of them makes a diagnosis of NPD. In reality most narcissists have almost all.

My search about narcissistic disorder led mainly to books about spouses (usually wives), co-workers and others who have to deal with narcissistic persons.

The first book, “Why is it always about you? The Seven Deadly Sins of Narcissism” by Sandy Hotchkiss, LCSW. Free Press, 2002. What she emphases is that narcissists are everywhere and abuse by them therefore follows. As I read the book I came up with several people from life who were narcissistic abusers and those who had to suffer from them. Even I had to suffer from a narcissistic partner. It took me two years to realize this guy was a sham but another five to realize he was a narcissist. Then it took me another six to wall away. “The narcissist we recognize as unhealthy is someone who, no matter what age, has not yet fully developed emotionally or morally. …there is an exaggerated posture of importance unrelated to any real accomplishments…The Narcissist may be intimidating, mesmerizing, even larger-than-life, but beneath the bombast or the charm is an emotional cripple with the moral development of a toddler.”

The narcissist has no empathy and in a chapter in the second book makes the case that there is a fine line between narcissistic disorder and sociopathic disorder.

The “Seven Deadly Sins” which is part 1 of the book are short pieces that summarize the generic material I have taken from the Mayo Clinic that defines the disorder. The balance of the book is about how to survive the narcissistic abuse. Part 2 delves into the possible causes of narcissism none of which I agree. Part 3 represents the balance of the book; “Survival strategies for a narcissistic world.” In other words “defending yourself.” One of the narcissistic methods is shame-dumping. This term means the narcissist’s particular talent for making their victims feel ashamed by transferring the narcissist’s underlying shame so as to hide behind their omnipotence. “This is an unconscious process for both the dumper and the dumpee, but what it means is that you end up being treated like the dirt they’ve brushed off their own psyches … They lob it onto you, you suck it in, and for an icky while, it’s yours.”

”So why dodo so many Narcissists float like cream to the top of the social order? Why are they are so prominent oate among our elected official, sports idols, and entertainment figures where wee pump them up at our own expense? Why do they head large corporations and lead flocks of the faithful?”

One survival technique she mentions is ultimately how I broke the bonds to my narcissistic partner. “…It is wise to work through any anger you have toward this person before making your approach.” I can summarize it as “kill them with kindness”, then suddenly switch to attack mode. For me, this means engaging them in calm, even ingratiating conversation, then suddenly go into attack mode by calmly telling them of their deficiencies and that you are not going to take it anywhere. Then walk away and never come back. An important part of this approach is to avoid anger or threatening to get revenge. That feeds their defense technique of rage.

Hotchkiss tells almost the obvious, “Many of today’s work environments have become stressful places where narcissistic leadership has toxic consequences for all employees.” (N.B. the current Whitehouse)

Hotchkiss also has a chapter about adolescent narcissism. The disorder can start at this age. It is when rebellion crosses the line into narcissism that reality sets in. Also, there is a chapter about narcissism and drug addiction and another about co-existing mental diseases emphasizing that they are separate disorders in a single individual. For example, when the drug abusing narcissist goes through rehab they will still be narcissists.

I particularly like her ideal situation whereby the narcissist has a sign over his door or office that says, “Abandon Self All Ye Who Enter Here…. The ranks of the wealthy and the famous are replete with narcissistic characters, but so are small businesses and job environments of every size and ilk. Power is the perfect antidote for shame, and the Narcissist sees power as his due. “

So, what are the survival strategies?

The second book, a much larger work, is “Becoming the Narcissist’s Nightmare: How to devalue and discard the narcissist while supplying yourself” by Shahida Arabi, LCSW, Archer Publishing, 2016. This book is the bible of surviving narcissistic abuse. I have already discussed the issues so I am just going to explain some definitions used by psychologists/LCSWs.

As I have said these books and the Mayo’s blog have opened my eyes as to the epidemic of Narcissists out there and their victims who can be scarred for life.