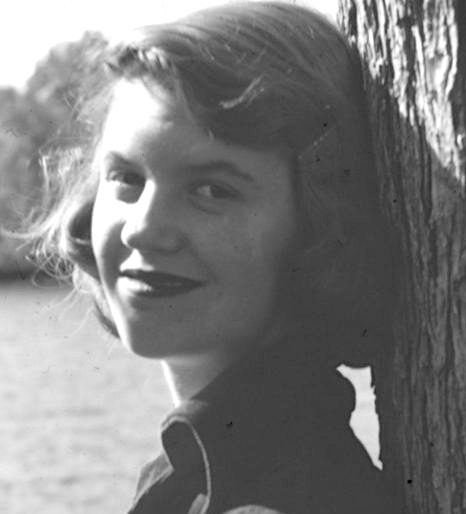 You the reader must think I have a fascination for artists who had depression or bipolar disease whose life ended in suicide. You are absolutely correct. Mostly I am interested in the correlation between bipolar and depression diseases and genius. I have many articles on this website about such people from artists to politics.

Paul Alexander’s wonderful book, Rough Magic, was researched largely by interviews with her mother, Aurelia, and surviving letters and papers. Released in 1991 Aurelia Plath was much pleased. A second edition was released in 1999 with a new forward.

While at Smith College Sylvia would begin her life-long pattern of rising at 4 am and write feverishly. Once she wrote eleven poems over seventeen days. She would not go back to make changes once written. She did not write during her depressions in the early morning. Such is the dichotomy. Productive over night in mania and depressed at 4 am. This is the beast that I call morning terror. (Common during many major depressions.)

I am not going to delve in Plath’s family history except to say that her father, a professor at Boston University, ignored worsening debilitating symptoms and died of a treatable disease, diabetes, in 1935. Sylvia was three. Her father’s death would plague her all her life. She considered his avoidance of seeking care as a kind of suicide.

Having grown up in Wellesley, MA. Sylvia never the less chose to go to Smith College. During those four years she already had many poems in national magazines. Such was her productivity and genius. And such was the onset of her beast.

Although plagued mostly by depressions there is evidence in Alexander’s book for Plath having bipolar II disease. At Smith in 1951 for example, she developed another episode of recurrent sinusitis and after which she again began a writing frenzy. She states “Sinusitis plunges me in manic depression.…”

After achieving success in magazines she would fear that she would lose the ability to write further poems. When she developed feelings of fear and inadequacy her depression was speaking.

By the spring of 1951 Plath had already suffered three months of depression. she “further descended into a depression that had actually prompted thoughts of suicide. My head felt numb, a paralyzing cavern, a pit of hell, a mimicking nothingness. I want to kill myself…to crawl back abjectly into the womb.”

The winter of 1953 “showed that Sylvia was descending into a dangerously unhappy mental state, the true severity of which no one in her life at that time fully identified.” She was 21.

In the first week home she had great difficulty concentrating on writing and even reading. Her “depression worsened. Writing in her journal on the 14th, she sounded dangerously disturbed. “All right, you have gone the limit, adding that all other friends were either married or being creative…You saw a vision of yourself in a strait-jacket, and a drain on the family, murdering your mother in actuality killing the edifice of love and respect built up over the years in the hearts of other people.’”

As her depression worsened she could not sleep. She read psychology books from the library that encouraged her feeling that she was losing her mind. One morning Aurelia saw healed scars on Sylvia’s legs. Her response, “I wanted to see if I had the guts!  Oh, mother, the world is so rotten! I want to die! Let’s die together!”

Outpatient electroshock therapy (ECT) was recommended. At the time no muscle relaxants or anesthesia were administered. So  could feel the seizures and feel the pain. Because of the AWAKENESS the ECT only contributed to her hopelessness.

On the Monday of August 24th she waited until no one was home. She broke into her mother’s pill box and took sleeping pills and a blanket and went to the dining room where she left a note saying she was going on a long walk. She then descended into their basement and hid in a crawl space behind a stack of firewood. She then restacked the wood in front of her. She took forty of the pills. (I would like to know which kind.)

For three days there was a search by family, police and citizens. The “missing Smith student” made national news.

Her maid went to the previously searched basement to do some laundry on the third day and heard a moaning. Sylvia was semi-comatose and was covered in vomit, an effect of the pills. She was stabilized at the Newton-Wellesley Hospital then transferred to the Massachusetts General Hospital’s psychiatric wing. It was now September 1st, 1953.

Having not responded well to the ECT she was transferred to the McLean Hospital. I call it the poet’s psych as at one time or another Robert Lowell, Pat Sexton and Sylvia Plath were patients there.

By this time she felt she had lost the ability to read and write. She was diagnosed with psychotic depression. Aurelia noticed that Sylvia began to suffer from ups and downs but often a blend of the two. The latter is called a mixed state and is particularly a risk for suicide. She had to relearn to read and write!! ECT or the bipolar depression?

She hoped the treatments, psychotherapy, occupational and eventually Thorazine, a strong tranquilizer used for severe depression and schizophrenia would prevent drastic mood swings in the future. She also received insulin therapy but Alexander’s book does not say whether she would reach insulin shock seizures. Note that 1953 was just two or three years before lithium was released for use on humans.

A side note is that during the second month of hospitalization she learned she had been elected to Phi Beta Kappa. During a depression we so underestimate our abilities.

She was into her fourth month of hospitalization but the docs still wanted to hold off on further ECT. It was decided to put her on Thorazine, the only drug that sedates enough to calm down severely depressed and schizophrenic patients. If that did not help then ECT would be resumed.

Meanwhile, Sylvia was transferred to Boston Psychopathic Hospital for financial reasons. It was decided to start a second course of ECT. This time she recovered after only two or three treatments. By mid-January she could be released from the hospital. She was given to ok to return to Smith for the second semester.

Alexander, in one page of the book, mentions another disease Plath suffered; obsessive compulsive disorder. A Smith roommate noticed that “Sylvia folded, stacked, and arranged her clothes with a sort of studied, military precision.” When asked about this Plath said, “Yes, if anyone ever disarranged my things I’d feel as though I had been raped intellectually.”

In 1956 Sylvia married Ted Hughes. She had dated many wonderful men while at Smith. Hughes was a philanderer and physically dominated Plath. Alexander’s rendering of this degree of dominance at first excited Sylvia. In 1962 she discovered Hughes had been having an affair. After two children and six years of marriage she was devastated. Their eventual divorce and her loneliness contributed to her self-destruction.

The year 1962 was one of anguish. Now she was living alone. Her work, The Bell Jar, was rejected by Knoph. It was accepted by the London Magazine as were some of her other poems and released in January, 1963. But the events of 1962 left Sylvia in an unremitting depression and now she was needing sleeping pills.

In February she started seeing a psychiatrist supplied by the National Health Service in England. The diagnosis was “Pathologically Depressed.” She was placed on tricyclic antidepressants and monoamine-oxidase inhibitors, the latter dangerous if certain foods and beverages are not avoided. She still took barbiturates for sleep. A thought just came to me. Why wasn’t she started on lithium? It was released in 1955. Starting lithium was the magic bullet for Robert Lowell and probably was responsible for living a long life.

Having her suicide plan now and considering her two young children and au pair were living there, Sylvia carefully put down towels to cover spaces under doors using tape where needed.

When the housekeeper got no response the morning of her suicide she gained entrance with the help of a construction worker. Sylvia’s body was sprawled out on the floor with her head still in the oven. The unmistakable smell of gas had greeted them upon entrance to the house. She was already dead.

As is many artists fame only comes posthumously. Do we have to suicide to have our work disseminated to the public?

A few works by Sylvia Plath:

She won the Pulitzer Prize in 1982 for her collected works.